London has been an even more excitable city this past week being the host of the UEFA Championship matches. Hyde Park hosted an 8 day free festival with a variety of events. The most important was getting your picture taken with the cup. 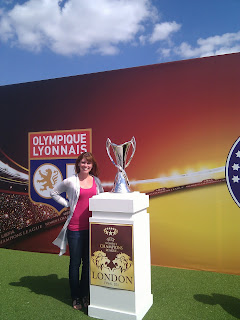 Here I am with the Women's cup.

Then, we turned the corner and saw the men's cup! The line was pretty long and I made a B-line to it. Hubby looked at me and said, "Are you serious? This line must be an hour long! Are you really going to wait?" All I said was, "Yes." So he disappeared for a while and brought me back a bottle of water. I was still only 1/2 way there, so he disappeared again until I texted him that I was next and to rush back over.

I got into position and he went to take my picture. The nice woman there said, "How about both of you. A family picture." Hubby responded with, "No thanks. Just her." I had to laugh! They were honestly surprised that he did not care. 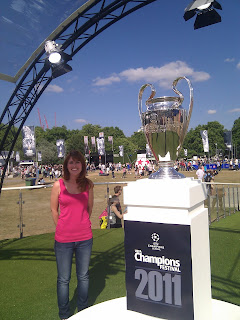 Tickets for the men's game Saturday were impossible to get. It was reported here that some people paid up to £3,500 for some tickets. That's about $7,700 (approximately). For ONE ticket! I opted for the £5 tickets to the women's game. And they did not disappoint. It was a French team vs. a German team. France one 2-0 and was interesting the entire time. It was hosted in Fulham and lots of locals were disappointed they did not work harder to promote the game. Fulham has a really neat old stadium. I will return for more matches there. I'm sure they will not cost £5 however. 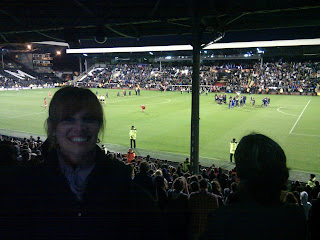 Saturday came around and all I could think about is: Where are we going to watch the men's game? We're walking through The British Museum and I am hardly looking around because I'm too busy searching for pubs that have TV's and Sky Sports. Over two hours before the game even started, I said, "We have to find a place NOW." Once again, hubby thought I'm crazy.

We walked by and stuck our heads in several pubs. We finally settled on one and even got a table! I came prepared with two games in my bag. We ordered 2 pints and started playing card games. 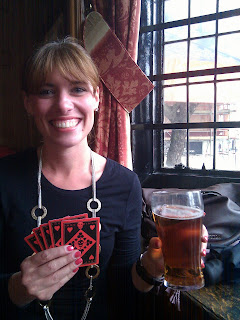 When hubby went to get the 2nd round and order dinner, he came back and said, "I don't know how to tell you this, but the kitchen is closed and all they have are nuts and crisps." I looked at him like he had 3 heads and said, "That won't work. We need food. Let me look for a place." So I looked on my phone and headed out. I came back a bit later with Subway! I haven't had that in so long and it was delicious. Made me think of all my old coworkers back in California. We were obsessed with eating there! Not a bad place to frequent.

So we watched Machester United lose. :( Oh well, we were surrounded by about 30 people in this small room upstairs above the bar and more people down below. What a fun night in the streets - before the match. Pretty much went directly to bed after the match! It was a long day.
Posted by Esterina at 12:41 PM